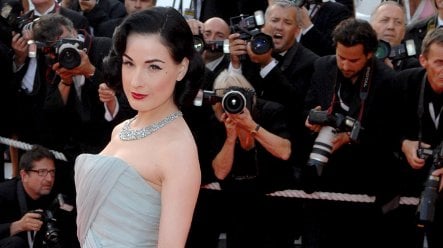 The band, which includes German producer and musician Alex Christensen and American Broadway performer Oscar Loya, will perform their song “Miss Kiss Kiss Bang,” which they’ve described as a mix of pop and swing.

Von Teese will play the character of Miss Kiss Kiss Bang during the performance on May 16.

“I feel honoured to appear with Alex and Oscar at the Grand Prix in Moscow,” she told Bild. “I really hope the cooperation will help them win.”

The 41-year-old, together with the 29-year-old Loya, in February won public broadcaster NDR’s secret ballot competition out of 100 other artists to represent Germany.

The selection process was part of the country’s new plan to avoid embarrassing acts like last year’s No Angels, who top German music and television industry experts criticised roundly after they came in last place in 2008. Christensen himself was also critical of No Angels, calling them “robot bimbos,” according to newsmagazine Stern.

Stern wrote in February that the new group has a better chance at winning this year’s Eurovision, arguing that Christensen is among Germany’s most successful songwriters in Germany – even if his songs “aren’t particularly witty.”

His brand of music will be particularly successful with viewers in Eastern Europe, and the new group can also sing in key, which was a problem for No Angels last year, the magazine said.