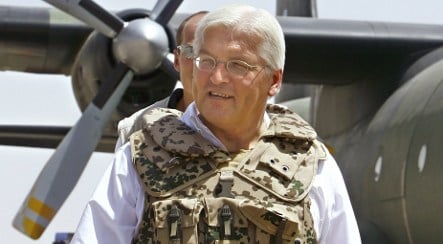 The bomber blew himself up in a car just as a vehicle full of German soldiers passed some 15 kilometres from Kunduz, the Foreign Ministry announced.

Steinmeier plans to stay for two days to meet with President Hamid Karzai and other officials.

His trip was kept secret as a security precaution, the Foreign Ministry said.

He is accompanied by Germany’s special envoy to Afghanistan and Pakistan and ambassador to India, Bernd Mützelburg.

The visit takes place just a few weeks after a conference at The Hague where the international community discussed the state of the country.

Germany has 3,500 troops in Afghanistan operating under the NATO-led International Security Assistance Force (ISAF). The soldiers are based in the relatively peaceful north of Afghanistan.

Last year the German parliament voted to increase to Bundeswehr troop numbers to 4,500, despite the fact that the mission, Germany’s first major overseas military operation since World War II, has been highly unpopular. Thirty-one German troops have died in Afghanistan since 2002.