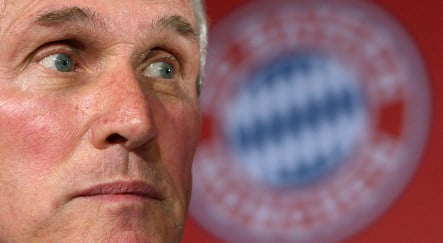 “A club like Bayern Munich must be playing in the Champions League next year,” said Heynckes who won two Bundesliga titles with Bayern in his first spell as Munich coach between 1987 and 1991. “Five teams can still win the league and the players are better, for example, than the way they played last weekend.”

Klinsmann was sacked Monday after the last in a series of bad results, a 1-0 home defeat to Schalke 04, left the defending champions in third place three points behind leaders Wolfsburg.

Heynckes, 63, said he was “surprised” to be asked to take over from Klinsmann, but he quickly accepted the position “out of friendship for Bayern Munich and for Uli” Hoeness, who is Bayern team manager.

Along with assistant Hermann Gerland, who was promoted from coaching Bayern’s reserve team, Heynckes was set to take his first training session on Tuesday afternoon and wants to hold one-on-one talks with the players.

“I want to see how the players are moving, how active they are,” he said.

Heynckes’ first game in charge this Saturday will be against Borussia Mönchengladbach, the club he represented for eight years, winning four Bundesliga crowns and the UEFA Cup, in 1975.

“It’s not exactly a dream start,” he admitted.

But in his bid for a top two finish, Heynckes faces two relegation-threatened sides in ‘Gladbach and then Energie Cottbus the following weekend.

Although Bayern are only three points off the pace, Hamburg, Stuttgart and Hertha Berlin are also in the race for the Bundesliga title. Bayern chairman Karl-Heinz Rummenigge said he aims to name Klinsmann’s permanent successor within the next six weeks and scotched rumours Arsenal coach Arsene Wenger – who speaks fluent German – has been approached about the job.

Having guided Germany to third place at the 2006 World Cup, Klinsmann’s Bayern contract was until June 30, 2010, but he only lasted 10 months in his first role in charge of a domestic team and lost seven of his 29 league games.

The first signs of trouble came last September in the Bundesliga when Werder Bremen embarrassed Bayern 5-2 in front of their own fans. The alarm bells then rang when Bayern were hammered 5-1 at Wolfsburg on April 4 in the Bundesliga before being routed 4-0 at Barcelona at four days later in the first leg of the Champions League quarter-final.