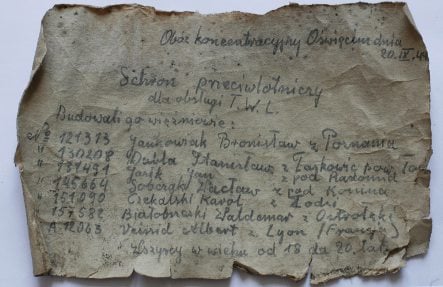 Just a few days ago, workers in the Polish city of Oswiecim found the bottle encased in a cement wall they were tearing down at a former Nazi bomb shelter now used as a vocational school, Mensfeldt said.

“In 1944 there were camp prisoners constructing a bomb shelter for the soldiers and they must have placed the bottle in the wall as they were pouring concrete,” he said.

The letter may have been hastily scribbled on a piece of a cement bag.

Seven prisoners, among them six Poles and a Frenchman aged 18 to 20-years-old, signed the letter and included their camp identification numbers.

Based on this information, Mensfelt said Auschwitz-Birkenau historians were able to determine that two of the Polish men had survived, but their whereabouts were unknown.

But on Tuesday, Mensfelt spoke with the granddaughter of the French prisoner, Albert Veissid, who just celebrated his 85th birthday in Marseilles, France.

“A man in northern Poland read the newspaper story and found him via Google,” Mensfelt told The Local. “He called and it appears to be the right person. The former prisoner’s granddaughter, whom I spoke with, is also on Facebook and so far it all sounds credible.”

According to Mensfelt, finding concentration camp survivors can be extremely difficult, so the Auschwitz-Birkenau memorial and museum put out a personal appeal for anyone with possible knowledge of those who wrote the letter to contact them.

“The man who found the family in Marseilles simply took a personal interest in the story, got lucky, and found them,” he said.

Former prisoner Veissid told French news agency AFP that he doesn’t remember the bottle, “yet it’s absolutely my name on the message and my registration number: 12063. I can’t forget that number becasue it’s on my arm.”

The letter will be officially handed over to the Auschwitz-Birkenau museum on May 6.

Another concentration camp message in a bottle from a former Sachsenhausen prisoner was found in 2003.

Nazi Germany established twin concentration camps Auschwitz and Birkenau on the outskirts of Oswiecim in 1940. It grew into the Nazis’ largest death camp, where more than one million Jews, Roma and prisoners of war from across Europe were murdered.