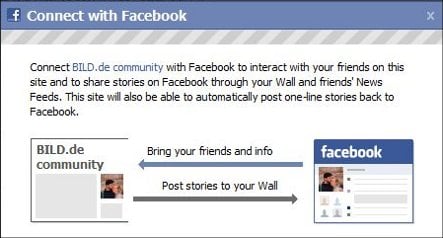 Photo: Screenshot of the Bild/Facebook login.

The partnership via “Facebook Connect” automatically informs a user’s network of any content their contacts have posted on Bild’s website, and is the first such Facebook partnership in Germany, Bild spokesperson Tobias Fröhlich told The Local.

“It’s a classic win-win situation for both sides,” Fröhlich said, adding that no money or user data would change hands in the deal. “There are more possibilities for greater exposure to both Facebook and Bild content,” he said.

Facebook, founded in 2004, reports having some 200 million active users, meanwhile Bild.de claims more than 1 billion page impressions per month. Because just 2 million Facebook users reside in Germany, according to Bild, the partnership does indeed promise to be mutually beneficial.

“Adding the world’s largest and most popular online community fits into our goal of moving new and younger users to participate on the site,” Fröhlich said.

A Facebook spokesperson told The Local the company was “delighted” Bild had implemented Facebook Connect on their site.

Though Bild claims Facebook users will only need one login name and password, readers can’t benefit from the synergy until they register with the paper’s system. Only then does the “Connect with Facebook” option log users into both sites and start simultaneously posting Bild.de comments on the news site and their community news feeds.

Meanwhile German media news site Meedia.de noted that Bild listed “Facebook addiction” as a no-no for their “In & Out” list of popular pastimes just last week.