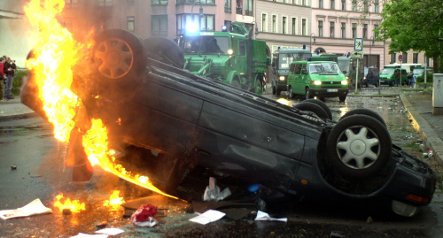 A file photo of a May 1 car burning in Kreuzberg. Photo: DPA

The number of patrols has been increased, he told the paper. “But we can’t put officers on every street or put video surveillance on every street,” he added, saying such action wouldn’t be constitutional.

“We already have a few suspects in our sights,” Körting said, adding that some would be arrested “with certainty.”

But police aren’t planning to infiltrate the leftist scene in the city, he said.

“This isn’t effective, because such crimes are spontaneously planned by individuals,” he told the paper, adding, “They light things on fire for fun – they are psychopaths.”

The traditional left-wing protests scheduled for May 1 in the city’s alternative Kreuzberg district – which have often become violent in the past 20 years – will not be a problem, Körting said.

“I am convinced that our operational policy of extending our hand in friendship will work this year too,” he said. “That the citizens of Kreuzberg – including the leftists – don’t want these riots any more, is a decisive factor.”

Attacks against luxury cars happen regularly throughout the city, but in Kreuzberg, where anti-capitalists famously protested the establishment of a new McDonald’s, it happened more than 46 times in 2008.

Last June Berlin police chief Dieter Glietsch sparked a storm of criticism by warning the owners of fancy cars simply not park overnight in the district after the rash of auto arson.