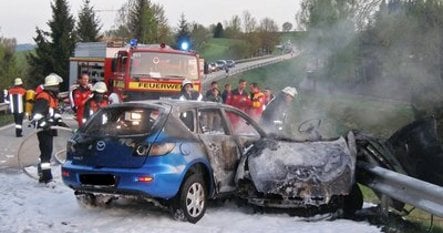 The 19-year-old driver with three 17-year-old passengers apparently lost control of the vehicle as another car passed her near Waldkirchen on Monday evening, spinning into oncoming traffic. Her vehicle collided with a 49-year-old woman’s car. The car full of girls then hit an embankment and flipped several times, leaving both cars in flames, completely destroying the 19-year-old’s vehicle.

The driver and passenger were both thrown from the car during the accident, while the two other young passengers were trapped in the wreckage.

All four young women died from the accident and the 49-year-old woman was hospitalised with severe injuries, police reported.

The 18-year-old boy who passed the car full of girls witnessed the accident in his rear view mirror and stopped. Police are unsure of the exact cause of the accident, but believe the female driver may have been startled by his move to pass her car and could have pulled the steering wheel abruptly.