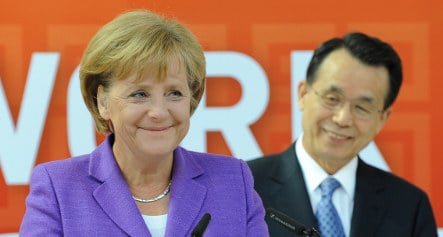 Merkel spent two hours visiting different stations and posed questions to product developers at the technology fair, which managed to exceed the number of exhibitors in 2008 despite the difficult economic climate.

“Perhaps the Hannover fair is a small signal that we have slowly reached the low point,” Merkel said.

The chancellor, a physicist, appeared to be particularly interested in the motto of robotic machinery company Wittenstein AG: “Technology gets feminine.” The company presented a team of all female employees to Merkel, who inquired as to what each of them had studied at university.

The company is among those suffering from a record reduction in industrial orders, but Merkel maintained her optimism, saying she expected Germany to emerge from the global recession stronger than before.

“Innovations, energy savings – these are the things that will be decisive for the future,” she said.