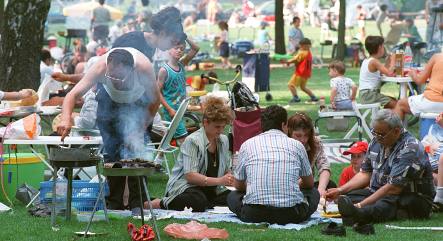 Over Easter weekend alone, clean-up crews bagged some 15 tonnes of trash from Berlin’s largest park, the Tiergarten, in an operation that cost the city some €16,000. On the same weekend in Hamburg, city sanitation workers tallied a stunning 20 tonnes of post-picnic detritus from the banks of the Elbe river.

City appeals for park revellers to take responsibility for the mountains of empty beer bottles, smouldering charcoal and food packaging remnants have been unsuccessful, and officials are at a loss as to what can be done.

“It has never been so bad,” one Hamburg official said.

Berlin politicians from the conservative opposition Christian Democrats have suggested a visitor’s tax of €7.50 on those who wish to barbecue in public spaces. The tax is a logical response to what Berlin CDU parliamentarian Uwe Goetze sees as a damaging new attitude from Germans – that if they pay taxes, they can behave however they like.

Meanwhile Frankfurt officials are considering an outright ban on public barbeques, and park rangers already patrol areas that adhere to a partial ban. But enforcing the ban with citations and fines simply isn’t practical in many areas becuase cities can’t afford to deploy armies of garbage spies to enforce the ban into the late hours of the evening.

Berlin’s Tiergarten employees have responded by simply fencing off favourite grilling corners of the park to ward off the messy hordes of holiday makers.

But other cities are hopeful they can appeal to a sense of pride and stewardship in the public. In Frankfurt, a cross-department programme called “Clean Frankfurt” aims to improve the city’s image by reducing errant garbage and graffiti with more trash receptacles and a clean-up initiative.

The Lower Saxony city of Braunschweig isn’t relying on appeals to civic duty alone, though. Their new campaign “Our clean Braunschweig” will be mercilessly enforced with fines, a city spokesperson said.