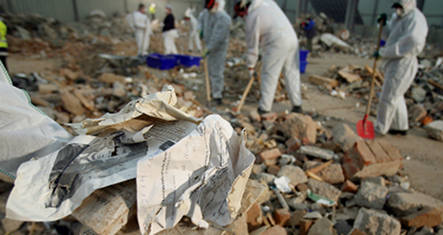 The estimate comes from auditors working for the state of North Rhine-Westphalia and exceeds the €950 million cost of the controversial four-kilometer subway tunnel through Cologne that is thought to have been the cause of the building’s collapse. The March 3 accident killed two men who lived in a neighboring building.

Archivists sifting through the rubble announced last week that they had recovered the Nobel Prize certificate of famed writer Heinrich Böll, who was a native of Cologne.

“It was found in an archive box and is in good condition,” Bettina Schmidt-Czaia, the archive’s director, told the daily Kölnischen Rundschau on Thursday. Most of Böll’s collected documents had only been placed in the archive just three weeks before the building’s collapse.