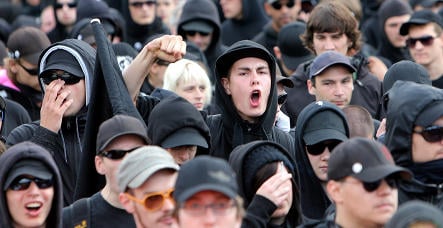 No serious incidents were seen, as police kept a close eye on the protest that critics branded a pretext for marking Monday’s birth anniversary of Nazi German dictator Adolf Hitler.

Some 1,250 police officers, including 750 riot police, were mobilised, said police colonel Oldrich Zeman, in a security operation that included the seizure of guns, knives and baseball bats.

Police said they averted possible clashes between the neo-Nazis and some 200 counter-demonstrators, mainly anarchists.

“Police will be on the alert all night,” regional police spokeswoman Jarmila Hrubesova told AFP but would not give a figure of those arrested.

Most of the participants were young people dressed in black. They began their rally with speeches in Lidice Square, named in memory of a Czech village where German forces massacred all 192 menfolk in a June 1942 atrocity.

The protest was comparable to “a dance of the assassins, on the mass grave” of the victims of Nazism, said Miroslav Broz, a member of a local group opposed to the presence of neo-Nazis in Usti nad Labem.

Two months ago, nearly 6,000 neo-Nazis paraded through nearby Dresden, across the border in eastern Germany, to mark the Allied bombing of that city on February 13-14, 1945. Police made several dozen arrests.

Historians say Allied air raids on Usti nad Labem in April 1945, within days of the end of World War II, targeted the railway station — a strategic site for the Nazis after the Dresden bombings — as well as SS barracks and the local branch of the Nazi party.