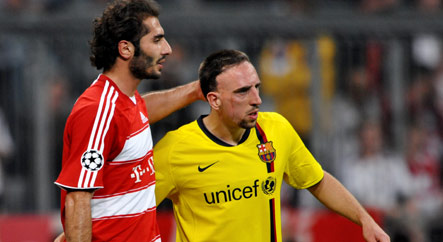 France midfielder Ribery and the rest of the Bayern team were schooled by Barcelona at the Nou Camp on April 8 when the German champions were humbled 4-0 in the Champions League quarter-final first-leg tie. Henry was one of the Barcelona stars who shone brightly, and when asked whether he wants to play for the Spanish giants, Ribery told the Munich Tageszeitung: “Of course, who wouldn’t want to play for Barca?”

This is not the first time this season Ribery has spoken with enthusiam about the Spanish giants.

He briefly wore a Barcelona shirt on Tuesday night after exchanging with an opponent following the 1-1 draw against the Spanish at Munich’s Allianz Arena in the second leg.

But the Frenchman, who is under contract at Bayern until June 2011, added: “I only said that I understand now why he (Henry) has so much fun and has such a long contract there – nothing more, nothing less.”

Ribery is set to lead the French attack at next year’s World Cup in South Africa and has been courted by several top European sides this season after helping Bayern win the Bundesliga and German Cup last season. But Barcelona president Joan Laporta has said he is reluctant to pursue either Ribery or Germany defender Philipp Lahm in order to preserve the close links between Barcelona and Bayern.

Meanwhile, Ribery has defended embattled Bayern coach Jürgen Klinsmann who was booed by his own fans on Tuesday before the Champions League second-leg draw with Barcelona.

“Klinsmann is going through a difficult phase at the moment,” admitted Ribery. “The whole attack must rally around him, as well as the squad and every single player.”

And Ribery said Bayern must expand their squad if they are going to compete for top European honours.

“We need a bigger squad, if we have one or two injured players, then we immediately have a problem,” he said. “As long as that continues we will struggle when we meet the top sides.”

Bayern are second in the Bundesliga and face Bielefeld on Saturday.