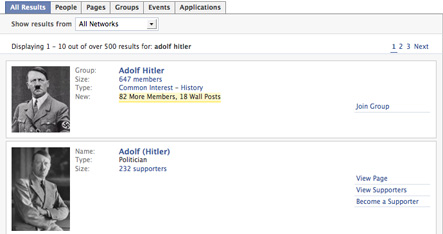 A Facebook search for “Adolf Hitler” brings up hundreds of groups and profiles, and only a few of these are critical of the former Nazi dictator’s ideology, according to bloggers like those on boocompany.com. Other users have taken on names such as “Josef H Goebbel S,” and feature swastika images and right-wing extremist tattoos next to comments that read “Heil Hitler,” the bloggers say.

Other online German networks, such as StudiVZ and SchülerVZ were already known to attract neo-Nazi misuse, but because Facebook only launched in the country in 2008, such activity among the country’s some two million users has thus far remained largely unchecked.

Many of these groups and profiles were founded by German members, but they often have members from the US, Italy, South America, Indonesia, Turkey, and Arab countries.

The German youth protection agency Jugendschutz is working to prevent the spread of such content, reporting in 2008 that it had documented more than 750 instances of hate videos and profiles online, plus some 1,635 hate propaganda websites in 2007 – the highest rate since they began researching in 2000. Even so, Jugendschutz spokesperson Stefan Glaser said he is astonished by the amount of right-wing extremist content on Facebook.

“We don’t usually see foreign profiles on the screen,” he said. “This listing will be a chance for us to look at and analyse the German profiles and approach the provider about violations.”

But Facebook does not want to infringe on the rights of its users with strict censorship, the company said.

“We take our user conditions very seriously and react quickly to block groups that damage these rules,” spokesperson Barry Schmidt said, adding that the company tries to find a balance between protecting groups who feel threatened and free speech.

Meanwhile the Young Socialists in the SPD, known as Jusos, called on Facebook Thursday to remove neo-Nazi activity from the site, saying the company should take more responsibility for its content.