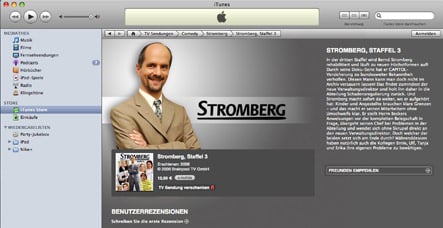 Films and television series in German and English from large Hollywood studios like Paramount, Disney, Sony Pictures and Warner Bros., will be available in addition to those from independent studios, Marketing Director for iTunes Europe Oliver Schusser said.

New films will become available the same day they debut on DVD, he added.

Purchase prices will run at €14 for new releases, €10 for current films, and €8 for older films in the catalogue. Rentals will run between €3 and €4 and be available to view for 48 hours.

The new iTunes film offerings will compete with Germany’s two largest online film retailers, Videoland and Maxdome. But all of these are battling online film piracy, Schusser said.

“The great market potential is being crowded out by the free downloads from dubious sources on the internet,” he said.