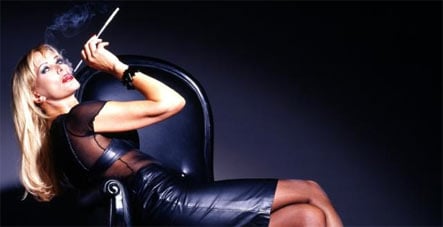 Photo: A screenshot of The Countess from her website.

A jogger found both 28-year-old Björn B. with 19-year-old Jessica dead with plastic bags over their heads in a white station wagon in a Krefeld parking lot near a lake in what police called a “very unusual incident.”

Björn B. left a suicide note in the car explaining that Jessica had died accidentally, Greger said. “He obviously felt it was his fault and took his life,” he said.

“Björn was into autoasphyxiation to increase arousal,” The Countess, owner of a sadomasochism studio, said. “He oversaw my website and also enjoyed being a guest in my domicile.”

Jessica’s death surprised The Countess, who said Björn was very experienced with such sex games and was never “extreme” or “dangerous.”

“He was a very sensitive person,” The Countess said. “The death of the girl was certainly too much for him.”

After breaking up with a former girlfriend who refused to participate in autoasphyxiation with plastic bags last year, Björn also lost his job. He apparently had hoped to find new happiness with Jessica, who he met online half a year ago, she told Bild.

“But this young love ended in a parking lot near a lake,” the paper said.