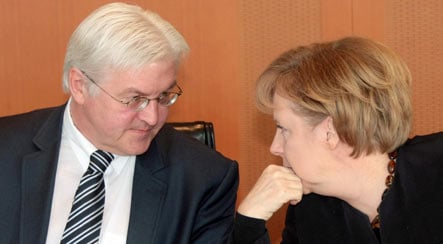 Only 22 percent of the 2,000 people surveyed said they would prefer Steinmeier to become chancellor – down two percentage points from the last poll.

Merkel, who governs in an uneasy right-left coalition between her Christian Democrats (CDU) and the SPD, was by far the more popular choice to remain chancellor. Gaining one percentage point, 51 percent of those asked said they hoped she remained at the helm of Europe’s largest country.

However, her party could not profit from her favourable poll ratings. The conservatives garnered only 35 percent of voter support – down one percentage point. Steinmeier’s SPD held steady at 24 percent, as did the environmentalist Greens at 10 percent.

Some 11 percent backed the socialist party The Left and 16 percent favoured the pro-business Free Democrats (FDP).

That would mean Merkel’s preferred coalition with the FDP would have a slim majority of 51 percent. Steinmeier, who has mooted the idea of a so-called “traffic light” coalition of the SPD, the Greens and the FDP, would have 50 percent.