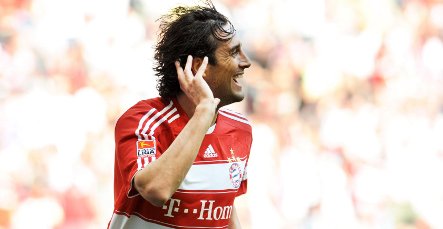 The debacle of Bayern’s 4-0 first-leg thrashing at the hands of Barcelona in Spain last Wednesday means only a minor miracle at Munich’s Allianz Arena will now keep the Germans in the competition.

Argentina star Lionel Messi, Samuel Eto’o and Thierry Henry all scored in the mauling of Bayern in Spain last week as Barcelona played some breath-taking football.

The defending Bundesliga champions responded by hammering Eintracht Frankfurt 4-0 on Saturday to exorcise the ghosts of last week’s Barcelona nightmare and Schweinsteiger says his side will not roll over on Tuesday.

“The defeat (in Barcelona) was painful for us and our supporters, but we’ve taken a first step in the right direction, and we hope we can take the steps we need beyond that,” said Schweinsteiger.

“Our job as a team is to represent the club to the best of our abilities, but we didn’t do that in Barcelona. We need to take another step forward in the German League table and catch up with Wolfsburg. That would be sensational.”

And Bayern coach Jurgen Klinsmann – whose job is on the line after heavy recent defeats by Bundesliga leaders Wolfsburg and Barcelona – is determined his side will hold their heads high against the Spanish giants.

“We have big plans for Tuesday night, because we want to make a fitting exit from the Champions League,” said ex-Germany boss Klinsmann.

No Spanish side has ever won the treble of league, Kings Cup and Champions League, but Barcelona are on course after they opened a nine-point gap at the top of the Spanish League on Saturday with a 2-0 win over Recreativo Huelva.

Barcelona coach Pep Guardiola has warned his side Bayern Munich contain enough talent to hurt them, but the Spaniards would have to suffer a disaster to threaten their place in the last four.

“Bayern are capable of scoring four goals,” said Guardiola. “(Franck) Ribery, (Luca) Toni, (Bastian) Schweinsteiger and company are dangerous players. I didn’t have to see them score four goals to know that.”

Barcelona gave Bayern a master class in passing football at the Nou Camp last week and the Spaniards look a good bet to break English football’s strangle-hold on the Champions League in recent seasons.

“He has a fever,” said Guardiola, who hopes to lead Barca to a third title after 1992 and 2006. We will see how he is when he gets up tomorrow and take a decision during the day.”

Guardiola will watch the match from the stands having been sent from the dugout in the first game, which the Catalan club won 4-0 at the Nou Camp in all but wrapping up their place in the last four with Henry on the scoresheet.

But Guardiola echoed star man Lionel Messi in warning that the job was not finished.

“It’s not all done and dusted yet. Bayern will be out for revenge in front of their own supporters,” Messi had warned in an earlier press conference.