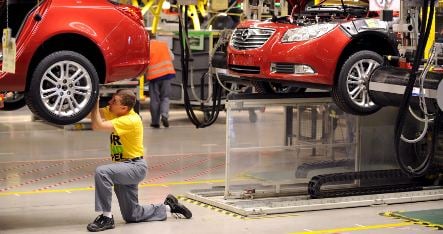 “I am confident and certain that an investor will be found,” Franz told the paper, adding that he awaited meetings with interested parties in the coming week.

The company, a subsidiary of troubled US carmaker General Motors, is scheduled to meet with high-level Abu Dhabi officials and North Rhine-Westphalia lawmakers at the end of the week after the United Arab Emirate expressed interest in the company last week, the paper reported.

Franz also told the paper that GM’s possible bankruptcy will have no effect on Opel.

“For us there will be no negative repercussions if it comes to Chapter 11,” he said, adding that Opel currently receives no money from its parent company.

Meanwhile head of the company’s Bochum division Reiner Einenkel urged the German government to force a separation of GM and Opel.

“Opel should not be drawn into the GM vortex,” he told the paper.

Over the weekend media reports said that the Opel factory in Eisenach was within hours of being closed some two weeks ago, with preparations made for a meeting to tell the 1,800 workers of its demise – a meeting only cancelled by the resignation of the GM boss in the USA.

Business weekly magazine Wirtschaftswoche reported that only the removal of Rick Wagoner, who was forced to resign on March 29 by US President Barack Obama, stopped the move to close the factory.

Eisenach factory manager Ralph Fürderer is said to have been told to call a meeting of the workforce to tell them of imminent closure.

The replacement of Wagoner by Fritz Henderson, who as former head of GM Europe is said to have more sympathy for Opel, halted that plan, and raised hopes somewhat that the brand might be rescued.

Berlin is wrestling with GM’s request for €3.3 billion in government funds from Germany and other European countries where it has factories. Opel, which employs some 26,000 workers in Germany, has presented a “restructuring plan” which received a cool reception from the German authorities, and is currently the subject of fierce debate between the coalition parties.