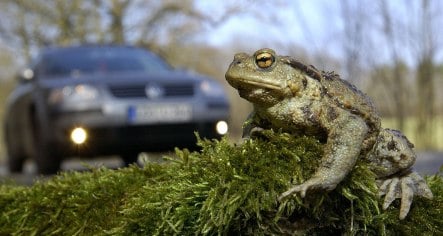 “The toad migration started at the beginning of March, and then there was a pause during the cold weather, but now it is full on,” said Andreas Krone, from the German Nature Protection Association (BUND).

He said around 250 toad fences are registered across Germany – along the sides of roads which cross the migratory routes the amphibians take to reach their breeding ponds.

These save at least half a million toads, frogs and newts each year, he said.

Each ten or 15 metres along the fences, which themselves are only a few inches high but run up to 800 metres alongside the road – a bucket is planted in the ground to catch the animals intent on crossing the road.

These buckets are attended at least once a day by the volunteers, who carefully take the amphibians across the road so they can continue their journeys.

The most common amphibian in Germany is the toad. “They travel up to two kilometres to reach their breeding ponds – further than any other species. That is why they are particularly endangered,” said Krone.

New roads which cut through such routes are now automatically built with little toad tunnels running under them to provide safe passage for the amphibians, but the older roads require the services of the toad volunteers.

Matthias Freude, president of the Brandenburg Environment Office said it was a shame that their engagement was often laughed at. “Without them, the amphibians would be much worse off,” he said.

He said a few days ago 500 frogs were carried across a road in one morning. “Each season there are about 12,000 at that spot, and one has to assume that otherwise between a third and half of them would be run over.”

The toad fence was erected there after lorry drivers called the authorities asking for something to be done to prevent the slaughter, saying they were driving through mashed up toads.