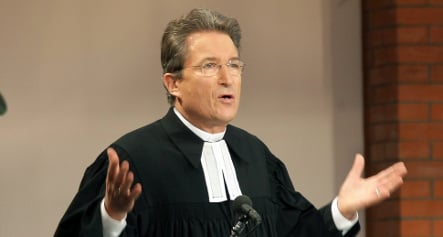 Speaking in Berlin, he said that violence did not stop over Easter. “And even when it is in other countries, it is close to us. Because we Germans contribute considerably to the spread [of violence].

“Our country is described as European champion of weapons export these days – for me that has become a Good Friday message.”

The bishop said German weapons exports had increased recently – and said it was a positive trade figure the country could do without.

“The export of weapons from Germany has increased by 13 percent from one year to the next,” he said. “Now our country ranks directly behind the USA and Russia in this business – ahead of all other European countries.”

He said that crisis regions were not always excluded from this business and warned, “One day soldiers of the Bundeswehr will be on foreign missions trying to stop violence which is being conducted with German weapons. A paradoxical thought.”

He said Germany did not have to prove its export prowess through the weapons trade. “Our job is to prevent deadly violence, not to cause death with weapons.”