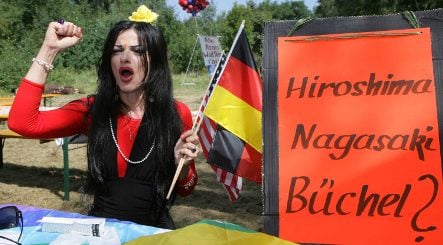 US President Barack Obama’s recent push for nuclear disarmament, and his joint declaration with Russian President Dmitri Medvedev to reduce their nuclear arsenals, prompted Steinmeier, who is the Social Democratic (SPD) chancellor candidate in this autumn’s general election, to embrace the anti-nuclear bomb cause.

He told this weekend’s Der Spiegel magazine, “These weapons are militarily obsolete today. He said he would push for the remaining US warheads “to be removed from Germany”.

Der Spiegel says this puts him in clear opposition to Chancellor Angela Merkel who, although she knew what Obama was planning to say at the NATO meeting, told parliament at the end of March, that the government was sticking to its participation in the nuclear arms situation.

She said this guaranteed Germany had a voice and some influence over decisions made in NATO circles. The Defence Ministry, run by the Christian Democratic Union’s Franz Josef Jung, is said to support the idea that only countries which host US bombs can expect to be taken seriously on the subject within NATO.

During the Cold War, the West German government secured a certain degree of influence in return for allowing thousands of American nuclear warheads to be stationed in its territory.

After reunification and the collapse of the Soviet Union, nearly all US warheads were removed from Europe, but some remain in Büchel in the Rhineland, the magazine reported, as well as some in Belgium, the Netherlands, Italy and Turkey.

Steinmeier spoke in Berlin on Friday as traditional Easter peace marches began across the country. He said, “For the first time for many years, we have the chance to create a new start for global disarmament and make peace safer.”

He said the vision of a nuclear weapon free world was one his party shared, and had now entered realpolitik. “Now the work begins with which we can make concrete progress,” he said.

He said the fact that 95 percent of nuclear warheads were in the possession of the US and Russia gave those countries the greatest responsibility for disarming. And he said conventional disarmament measures should be undertaken too, adding, “We have started on bans of malicious weapons such as cluster bombs but this must now be enforced, as according to UN estimates, half a million people are killed each year with such weapons.”