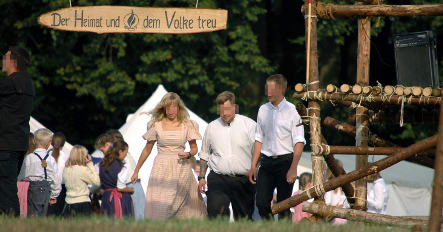 Stephan Kramer, general secretary of the council said that much of the mainstream political protest against anti-Semitism was largely window-dressing.

Talking to news agency DDP, Kramer said anti-Semitism was “once again widespread in all areas of German society.” He said fighting it was, “mostly only a dutiful expression in the political arena,” rather than real conviction.

He said the presence of neo-Nazis in state legislatures was a damning indictment of all democratic parties, and added, “The question must be must permitted of whether Germany is at best a fair-weather democracy. Until now no-one has been able to give a convincing answer to this question, in order to contradict it.”

He said the NPD, the neo-Nazi party which remains legal despite government attempts to ban it, played an important role not only in fostering but also in enabling anti-Semitism in Germany.

“Although the NPD is tail-spinning from one institutional and financial crisis to the next, there is no reason for an all-clear signal – just the opposite, as the radical powers are going about taking over the leadership of the far-Right scene.”

He said the concentration on the NPD had distracted from other, less visible organisations. The debate about whether to ban it was a pointless one he said, and simply served as an alibi to show that the politicians were engaging with the problem while other problems were ignored.

The HDJ case simply illustrated what a broad basis the radical Right scene already had, he said, adding, “Happily it has now finally been banned, but it had already been carrying out its mischief for far too long.” It demonstrated, he said, “how the neo-Nazis are very successfully active with their long-term aims of working on recruiting the next generation.”

He warned, “The ban of the HDJ will remain just a cosmetic measure if we do not now finally pay more attention to the area of youth work and offer alternatives.” He criticised the family ministry for its inaction, saying it continued to disappoint, particularly in youth work in rural areas.