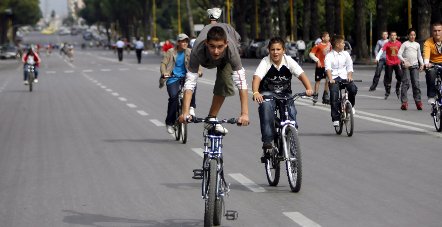 A file photo of boys on bikes, dude. Photo: DPA

Three boys aged 13 to 14 spent the evening repeatedly riding bicycles onto the street in front of oncoming cars, police said on Thursday. A fourth boy filmed their antics with a mobile phone from the roadside, giving signals when they should start their dash across the road.

At least ten drivers were forced to brake sharply before the police arrived, a spokesman said.

The boys also provoked several drivers by riding extremely slowly in front of the cars, zig-zagging enough to make oncoming cars brake too.

When the police arrived, the boys fled across neighbouring fields on their bikes. But police were able to identify the young rascals who are now being prosecuted for dangerous traffic violations.