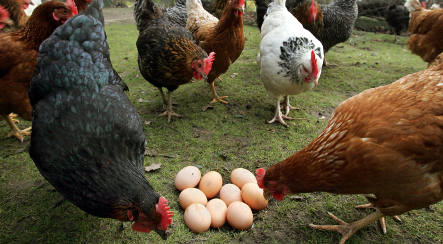 With 6,622 laying hens, Vechta produces significantly more eggs for boiling and painting than districts with the next highest quotas, Osnabrück (1,040 hens per square kilometre), Oldenburg (792) and Cloppenburg (728).

Germany is home to almost four million laying hens, with an average of 108 per square kilometre.

“Lower Saxony is, together with the core area of South Oldenburg and the surrounding districts, the heart of the German poultry industry,” Dieter Oltmann from the NGW association for the poultry industry in Lower Saxony said. The concentration of hens here was a product of necessity, he added.

“Farmers here in the Weser Ems region have specialised in keeping livestock since the 1950s and 1960s because the poor soil and small size of the farms made it impossible to earn a living from crop farming,” he said.

Germany was hit by eggs-traordinary news last week when it was revealed that Germans consume an average of three more eggs per person in the Easter month.

According to a new survey published by the Zentrale Markt-und Preisberichtstelle (ZMP), an institute that monitors agriculture and food market trends, they eat an average of 11 to 12 eggs in whichever month the Easter holiday falls.

The painted Easter egg tradition dates back to the 13th century, when people would first break their fast with an egg, and symbolised rebirth and the resurrection of Jesus. In the 17th century people began hiding these colourful eggs for children to find.