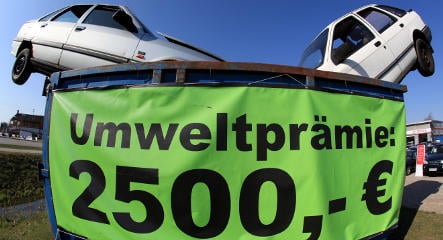 The current scheme, whereby new car-buyers receive the bonus if they scrap a vehicle at least nine years old, was set to expire at the end of May, but its enormous success forced the government to reconsider. More than double the original €1.5 billion budget has already been applied for.

The current “cash for clunkers” scheme – as one newspaper dubbed it – would only have covered 600,000 applications. But with the new funding, the programme will total €5 billion and cover up to 2 million scrapped cars. Some 1.3 million claims have already been made for the bonus, which many believe is keeping the German auto industry afloat during the recession.

The Abwrackprämie was part of the German government’s second economic stimulus package, and seems to have been successful so far. German auto sales surged 40 percent in March from the same month a year earlier to 401,000 vehicles, though experts said it was partly owing to a greater number of business days this year. In February, the first full month the plan was effective, new car sales jumped by 21.5 percent in Germany, while falling elsewhere in the 16-nation eurozone.

But various economists have criticised the scrapping bonus, arguing that it unfairly favours one branch of the economy, and will only stimulate sales superficially.