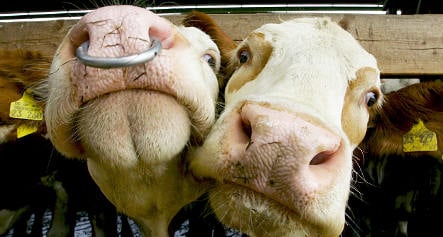 “When the situation remains the same as it has been, then one-third of the farmers won’t make it through the next year,” President of the German dairy farmer’s federation (BDM), Romuald Schaber, told the paper. “That’s 30,000 operations.”

According to Schaber, dairy products in Europe are currently sold at prices that are one to two percent lower than is sustainable for farmers. European Union intervention is also causing price problems he said.

“The EU pays €0.21 per litre and kilogramme for excess that sits in the warehouse,” he said, adding that the EU pays for private storehouse aid.

With some 90,000 tonnes of butter in storage, Schaber said “government money is burned unnecessarily” while the stored wares threaten to put farmers under further price pressures when they hit the market.

Producing milk products for a limited market would make more sense, he told the paper.

The BDM has complained of low milk prices for some time, and in May 2008 staged a 10-day delivery strike to protest prices they said were too low to support their costs. Prices were between €0.27 to €0.35 per litre. Farmers openly threw surplus milk down drains, fed it to their calves, or spread it over crops. Meanwhile some consumers had difficulty finding milk on grocery store shelves.