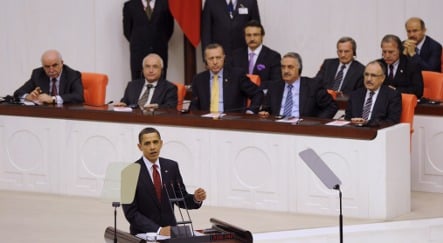 The CSU’s main candidate for the European Union elections, Markus Ferber, reacted against what he considered US meddling.

“We don’t need advice or demands from outside,” he said, adding that it is “the business of the Europeans alone” how the EU conducts its relations with Turkey.

Obama called on the EU’s heads of government to accept Turkey’s membership at a USA-EU summit in Prague on Sunday. The US President had previously helped to persuade Turkish President Abdullah Gül to accede to the nomination of Danish head of state Anders Fogh Rasmussen as the new NATO Secretary General.

German Chancellor Angela Merkel and French President Nicolas Sarkozy would prefer to give Turkey what they call a “privileged partnership” with the EU, rather than full membership.

While the US government might have “a say in the running of NATO,” decisions about membership “in its own club” should be decided by the EU alone Ferber said.

“Transatlantic relations between the EU and the USA are very important. But a part of that is that we keep out of our partner’s domestic business,” Ferber added.

Meanwhile CSU representative in the European parliament Bernd Posselt used even stronger language: “The EU is not Obama’s football. He is trying to reward the Turks at the expense of the Europeans, and simultaneously to weaken or undermine European integration.”

If that’s what he wants, Posselt ranted, “Obama should make Turkey the 51st state of the USA.”

The European Commission announced Monday that Obama’s statement would have no effect on the ongoing negotiations with Turkey for EU membership. “There is nothing new to report,” a Commission spokeswoman said in Brussels, “We are in the middle of a process.”

The framework for negotiations for new EU membership was decided at the end of 2004, and the negotiations began in 2005. Ten “chapters of negotiation” began then, one of which has been completed.

The spokeswoman also said that Turkey’s membership has nothing to do with NATO’s internal decisions.