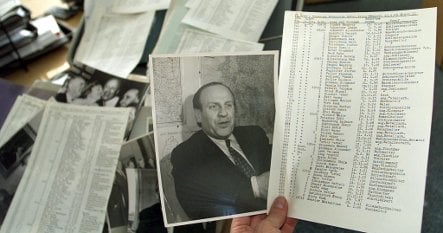 A file photo of other Schindler documents disovered in 1999. Photo: DPA

The 13-page list on yellowed paper includes the typed names, nationalities, birthplaces and mechanical skills, and was discovered by historian Olwen Pryke while she looking through author Thomas Keneally’s research papers for his book “Schindler’s Ark,” which was later made into the Oscar-winning film “Schindler’s List.”

“This list was hurriedly typed on April 18, 1945, in the closing days of WWII, and it saved 801 men from the gas chambers,” Pryke told the paper, adding that the document was “an incredibly moving piece of history.”

Oskar Schindler was an unlikely hero: a member of the Nazi party who used Jewish forced labourers in his factory in Krakow, Poland, he became disgusted by violence towards Jews and sought to protect his workers. Because his factory had special status as essential for the war effort, he was able claim exemption for those Jews the Nazis wanted to deport to concentration camps. Women, children and people with disabilities were shown to be essential employees at the factory.

The list discovered in the New South Wales State Library archives is one of only a handful of carbon copies of the original, which does not survive. Pryke added that Schindler compiled a number of lists as he persuaded the Nazis not to send his workers to the camps.

The library acquired the list unwittingly as part of Keneally’s research material for the book, which they bought from a manuscript dealer. The list had been given to Keneally by Leopold Pfefferberg, one of the Jews Schindler had saved (he is number 173 on the list) and who persuaded Keneally to write the book that brought the story to the world.

Keneally had a practical explanation for his somewhat blasé sale of such a significant document: “Writing so many books is not only a great weariness to the soul, it’s also a storage problem. But I’m very glad the list has ended up at the State Library.