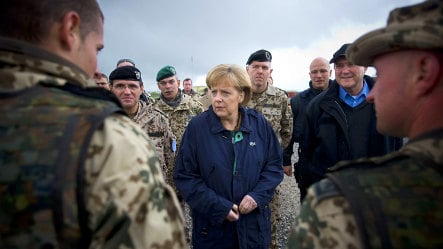 “She will be with German troops in different places,” the spokesman said. The official could not give details of her movements for security reasons but said she was not expected to travel to Kabul during the previously unannounced visit.

German soldiers are in the northern city of Mazar-i-Sharif and adjoining Kunduz. Northern Afghanistan sees less of the almost daily violence of the south, but there have been several attacks on troops.

The Afghan foreign ministry and German embassy in Kabul would not immediately confirm Merkel was in the country. Monday’s visit was her second to Afghanistan since November 2007.

President Hamid Karzai’s office said late Sunday that Merkel had called the Afghan head of state for talks on bilateral ties and to raise concerns about a new law covering the Shiite minority that critics say oppresses women.

Karzai has ordered a review of the law, which he signed last month but has yet to be published, amid claims that it bans women from working or receiving an education without the permission of their husbands.

Merkel had also invited Karzai to visit Germany, an offer he accepted, the statement from the Afghan presidency said.

Merkel’s visit comes on the heels of a weekend NATO summit, hosted by France and Germany, at which alliance leaders pledged thousands more troops for their Afghan mission, earning praise from US President Barack Obama.

Britain, Spain and Italy said they would send hundreds of extra troops each to secure Afghanistan’s presidential election in August, amounting to what the White House said was “up to 5,000” personnel in all. The deal was a victory for Obama, who came to his first NATO summit to promote his new Afghan strategy and singled out commitments from France and Germany as proof of their “seriousness of purpose.”

Merkel told the German parliament last month that NATO had to succeed in Afghanistan to stop the country again becoming a base for “terrorists” from which to attack alliance member countries.

“Afghanistan is NATO’s biggest test at present,” Merkel said. “For me our aim remains clear: to make sure that Afghanistan no longer poses a terrorist threat to our security, in other words in NATO member countries.”