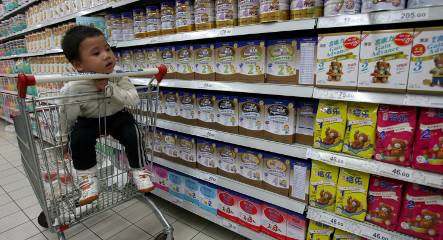 Authorities sealed up 48 cans of the baby powder in Suzhou Debao Baby Supplies Co Ltd, the brand’s general agent in China, in an inspection Saturday, the General Administration of Inspection and Quarantine said.

A spokesman of Hutchinson’s China subsidiary, who spoke on condition of anonymity, confirmed sales of NUK baby powder had been suspended but refused to comment on whether it contained the forbidden chemical.

South Korean authorities reportedly tested 30 brands of baby powder and found 12 contained the carcinogen asbestos, including the NUK baby powder, the quarantine agency said in a statement on its website late Sunday.

The agency said it would continue to “closely watch the matter and take effective measures proactively to safeguard the health and safety of infants.”

China was last year rocked by a scandal over milk contaminated by the industrial chemical melamine that killed at least six babies and left almost 300,000 others ill.

The scandal came to light in September, causing deep international concern and leading to recalls and bans around the world of products made in China.