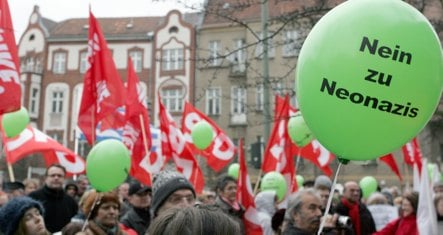 A German court authorised the two-day conference on Friday despite opposition of city authorities. Several left-wing parties, including the Social-Democrats, the far-left Die Linke and the Greens, had called for a protest against the neo-Nazi conference.

Three protesters were detained, though police reported that the protest outside the town-hall in Berlin’s Reinickendorf district was mainly peaceful.

Green party leader Claudia Roth and President of the Berlin parliament Walter Momper of the centre-left SPD attended the demonstration.

The conference could intensify the crises currently threatening the neo-Nazi party’s stability. Party leader Udo Voigt is embroiled in an increasingly bitter leadership battle with challenger Udo Pastörs, and recent media reports have reported that the party is on the verge of bankruptcy.