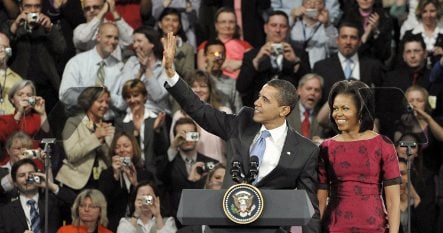 Some 22 buses came from the German city of Heidelberg in addition to buses from, Tübingen, Stuttgart and Freiberg that made the trip early in the morning, media reports said.

Students and local residents endured lengthy security checks and hours of waiting before they were able to greet Obama and his wife Michelle like pop stars around 2:15 pm.

The president’s 24-minute speech addressed many of the same themes he discussed during a well-attended campaign visit to Berlin in July. He highlighted the new US strategy in Afghanistan, called for a fight against poverty and climate change, and appealed to young people to renew the relationship between Europe and the US.

Obama also insisted that NATO is a security alliance, even as German and French police have braced for massive protests from anti-NATO activists and anarchists during the summit.

The 44th US president took questions from the audience of 4,000, encouraging them to civil engagement.

“The young people must become leaders,” he said, asking them to move away from superficial concerns.