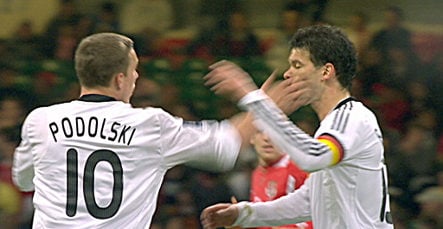 The DFB said, however, that they did not believe the Bayern Munich forward would be punished for his actions by football’s world governing body FIFA.

“Up until now, FIFA have not intervened,” a DFB spokesperson explained. “We are working on the principle that the referee for the game saw what happened and decided not to punish him.”

Podolski could theoretically have been sent off the field following the confrontation with Ballack, which took place during Germany’s 2-0 victory over Wales in a World Cup 2010 qualifier in Cardiff on Wednesday.

The altercation continued to make headlines in Germany two days after the event, despite the German management team deciding not to punish Podolski for his actions.

Podolski, named best young player at the 2006 World Cup, admitted that he had “over-reacted.”

“It was a bad reaction and I apologise,” he said.

‘Prince Poldi’, as he is known in Germany, came in for strong criticism in the German media on Friday, with daily Bild speaking of a “scandal” and a “slap in the face for (national coach) Joachim Low and the whole of German football.”

In an attempt to dampen the furore, the DFB announced on Friday that Podolski would contribute €5,000 towards a fair play initiative organised by the federation.

“It’s a fair decision after an unacceptable piece of behaviour,” said DFB president Theo Zwanziger. “When it comes to professional footballers, they have to be role models who are conscious of their responsibilities towards society.”

Podolski, who had disagreed with Ballack over tactics, has received the support of his club manager Jürgen Klinsmann, himself a former striker for the German team.

“For us, there is no problem,” Klinsmann said. “What happened is part of football.”