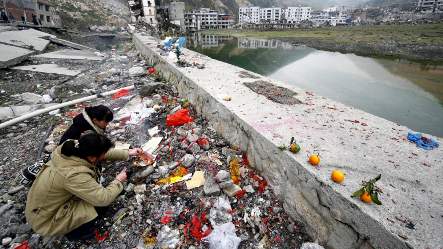 “I was instructed that I’m not allowed to be here,” Beijing correspondent for German daily Süddeutsche Zeitung, Henrik Bork, said via telephone.

The journalist had spoken with grieving relatives of those killed in the May 14, 2008 quake that killed some 80,000 in the Sichuan Province. Bork had also interviewed families of students and teachers at the cemetery in the city of Yingxiu who died in schools that collapsed, many of them due to poor construction and corruption during the building process.

“That is exactly the kind of research that they wanted to prevent,” Bork said.

The journalist was expelled from the cemetery and instructed to leave the location “as quickly as possible.” The justification given for banning journalistic activity in the area was that the street to Yingxiu was “too dangerous.”

“But I was treated very politely,” Bork said.

Just two days after the earthquake hit, Bork was the first foreign journalist to visit the devastated community near the quake’s epicentre and was detained by military forces.

Though the foreign office in the province of Chengdu said nothing of needing clearance for his visit, authorities in Yingxiu told Bork that he would need prior authorisation to work as a journalist.

The number of children killed after poorly built schoolhouses collapsed in the earthquake is among the most delicate issues surrounding coverage of the incident. At the end of May, local activist Tan Zuoren was arrested for mobilising support for an independent investigation, human rights organisations reported.