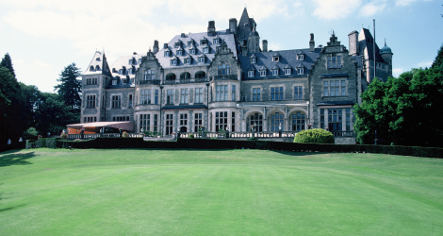 Crammed into a room in a Kronberg museum, a group of wiggly children were treated to a first-class musical treat on a recent Sunday afternoon. They attended a Classic for Kids concert put on by the Kronberg Academy in the city just outside of Frankfurt.

About 40 children sat on pillows on the floor and listened as moderator Christoph Gotthardt and his multi-colored puppet snake, Theophil, explained the difference between a rhythm in 4/4 time and a waltz, in 3/4 time. As a trio played, the children (and a few parents) traced imaginary squares in the air to 4/4 time and triangles for 3/4 time.

The interactive show was the first in a series of three Classic for Kids concerts that will be held this year. It featured an ensemble of top professionals playing the violin, viola and the violoncello for children aged 5 to 10.

By the end of this up-close and personal music lesson, children had marched, danced, sung, answered questions and identified famous segments of classical music, such as the opener to Beethoven’s 5th symphony.

At one point, Gotthardt held up a picture and asked, “Who is this composer? He was a role model to Schubert.”

“No. His hair was more wild. Who is this?” asked Gotthardt.

“It was Ludwig van Beethoven,” continued Gotthardt, adding, “Within four tones, you’ll know what music it is.”

The Kronberg Academy, which has earned acclaim for its Cello Festival held every two years, trains soloists in bachelor and master programs. It started the Classic for Kids series in 2005 to teach future audiences to listen – really listen – to fine classical music, such as that performed by its graduates.

Be sure to book early to secure tickets for the concerts, and allow time to explore Kronberg before or after the programme. The city has a good connection from Frankfurt on the S4 line (direct from the main station and Hauptwache). When you get off the train at the last stop, walk in the direction of travel toward the city’s ample and well-landscaped park. If your little ones need to run off some energy, the playground in the park could do the trick. In winter, on those occasions when the snow is thick enough, the park’s steep slopes double as sledding grounds.

Kronberg’s old town has been lovingly maintained, and you’ll definitely want to meander through its nooks and crannies. As you approach its top, and the castle that stands upon it, you’ll enjoy great vistas of the Frankfurt skyline. The old town hides many a bar and restaurant, so just take your pick.

Pizzeria Adler offers excellent Italian food and reasonable prices. For a finer meal in a casual setting, reserve a table at Zum Grünen Wald, which has received solid ratings from gourmet guides. Or check out Lucullus, which is near Berliner Platz. The upscale combination of wine bar, restaurant and business lounge is a favorite hangout for business people from Kronberg’s multinational tenants such as Accenture and Braun. Who knows, you might even catch a glimpse of the Kronberg elite, which supposedly includes the heads of the European Central Bank and Deutsche Bank.

For those who prefer to focus on the outdoors, Kronberg is a great starting point for hikes in the Taunus mountains. Trails will lead you to the ruins of the Falkenstein castle, and walkers can pass through the Opel Zoo or ascend to the Fuchstanz, a pass that was used by the Romans when they occupied the area. Kronberg’s ice-cold, open-air swimming pool is laid out on a massive patch of grass at the edge of the forest. It also provides excellent views of Frankfurt, and if the weather’s good, views of the Odenwald mountains.

Finally, consider lunching at the city’s five-star Schloss Hotel Kronberg. In summer, you can dine on the terrace that looks over the golf course and garden of the castle that once housed the top brass of the US military after WWII. During the colder months, you’ll be seated in the stately dining room and served with the utmost attention and care. The hotel frequently offers a special fixed-price menu with your choice of three courses. It includes water, wine and coffee at an excellent price for its gourmet quality. After lunch, enjoy a drink in the lobby near the fireplace and stroll in the rose garden behind the golf course.

Or, if you’re among the lucky who have already booked tickets for the next Classic for Kids concert, you’ll be touring the Schloss Hotel anyway. It’s the venue for the second concert in the series on August 30. Budding music lovers will have the chance to soak up the best of classical music in a castle. A real castle.