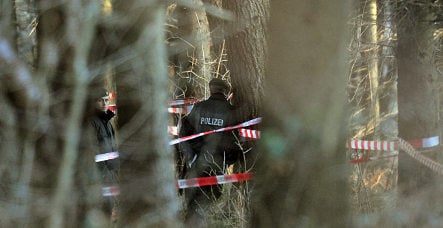 A file photo of a woodland crime scene. Photo: DPA

Landshut officers had been baffled since Monday afternoon when an 18-year-old hiker noticed bones along a wooded path near Bruckberg and sent a mobile phone photo to police, a statement said.

Police forwarded the photo to a medical expert who determined that they were definitely human bones, and that a piece of metal with the bones was probably part of an artificial hip.

“During a detailed inspection the officers discovered the corpse, which was hanging by cords between 10 and 12 metres high in a spruce tree,” the statement said, adding that there were no clues in the area as to the identity of the corpse.

The following day police enlisted the help of THW, or Federal Agency for Technical Relief, to build scaffolding high enough to recover the body from the tree in an area that was impassable by vehicle.

Police await DNA test results, but after a search through unsolved missing persons cases they believe the bones belong to a 69-year-old man who left a suicide note in July 1980. He was never found.