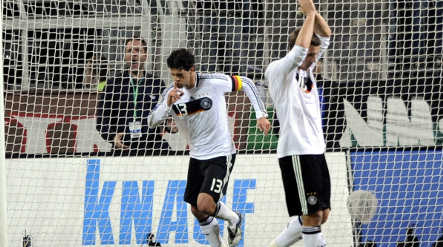 In the game’s 67th minute, tensions between Podolski and Ballack came to a head. Team captain Ballack gave the Munich attacker Podolski tactical instructions, and Podolski reacted with surly slap on Ballack’s cheek. Per Mertesacker, Simon Rolfes and Philipp Lahm rushed in to break up the fight between their teammates.

“For us as a team it’s important to watch out for each other,” Mertesacker said. “In this kind of situation as well, when there are differences of opinion then someone has to go in there and get between them.”

According to national team manager Oliver Bierhoff, coach Joachim Löw opted not to respond to the incident. Ballack and Podolski ironed out their differences in the locker room.

“The most important thing is, nothing stuck,” Bierhoff said on Thursday in Cardiff. The DFB-Eleven’s management consulted the team about the incident before bringing in Podolski and Ballack. “We made it clear that this kind of incident casts us in the wrong kind of light,” Bierhoff said. “In three minutes, it was done. They looked deep into each other’s eyes and high-fived.”

Podolski will not be fined by the German Football Federation (DFB) for the incident either, Bierhoff said.

But Ballack criticized Podolski’s on-field conduct. “I had something to say to him that he didn’t really agree with.” He added, “He has a lot left to learn, he’s still a young player.” Ballack refused to provide more detail of his heated conversation with Podolski.

“Lukas knows that it’s inexcusable to interact with a captain that way,” Bierhoff said, and Podolski later apologised.

“I don’t see anything there,” DFB head Theo Zwanziger said. “We won 2 to 0, that’s what is important in this game. The incident happened, you can report on it, but that’s really not what is most important.”

Driving Germany’s 2-0 victory was Michael Ballack, with a goal scored early in the game. Mario Gomez, recovering from a long scoring dry spell, managed to hit a point off of a Wales defender who kicked the ball into his own net. The win secured the German team a spot at the top of the tables in their World Cup qualifying group.

The next game for Ballack and his team will take place in August in Azerbaijan.