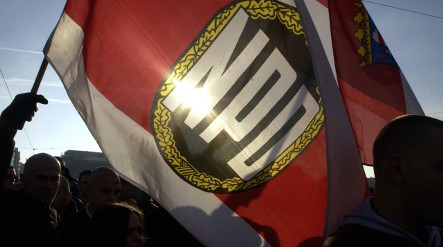 The penalty stems from serious errors in the NPD’s 2007 accounting report, wherein €900,000 in donations were improperly calculated. According to German weekly magazine Der Spiegel, the errors occurred through an “office oversight” and now the party is saying its “political existence is threatened.”

Earlier this month the magazine reported that the party was close to insolvency after the Bundestag deferred payment of more than €300,000 from the statutory party financing budget because of irregularities in the party’s 2007 accounts.

The party, which receives public funding based on number of votes, is not represented in the Bundestag, or lower house of parliament, but does have a presence in two regional governments.

Meanwhile Berlin’s Reinickendorf district has filed a complaint against an administrative court ruling that will allow the NPD to use space in the city hall for their Parteitag, or party conference, this weekend.

The decision followed the equality principle in Germany’s constitution, arguing that a decision against the NPD would put the party at an unfair disadvantage, news agency DDP reported.

The Reinickendorf complaint – which questions whether the facilities should only be offered for use for regionally specific organisations – will be reviewed by Berlin-Brandenburg’s higher administrative court (OVG).

Should the OVG mandate that the Reinickendorf district must allow the NPD to hold its party conference in the city hall’s Ernst-Reuter room, the district will try to pursue a user agreement with the NPD to ensure that the space is not used for the further dissemination of right-wing, inflammatory or anti-Semitic ideas.