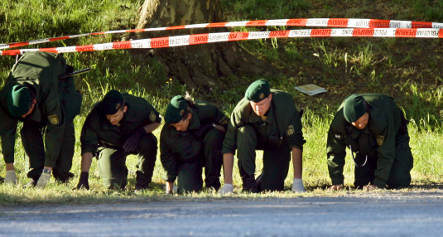 The authorities realised that Heilbronn, with the nearby motorway junction at Weinsberg, is a hub for organized crime, especially for eastern European mafia groups. The location where 22-year-old police officer Michele Kiesewetter was shot dead in 2007 is important for the mafia.

“Their main activities are human trafficking, credit card fraud and drugs,” a crime expert told Stern. There is evidence that several leaders of these organisations live in the region. The “Theresienwiese” car park, where 22-year-old Kiesewetter was murdered is an oft-used trafficking point for lorries loaded with drugs and other criminal goods, investigators say.

The case has developed into a major embarrassment for the police in recent weeks when it emerged that the profile of the “phantom killer” was based on faulty forensic procedures, where swabs not designed for use at crime scenes were used to collect evidence in several states.

Investigators now believe that swabs used in the “phantom from Heilbronn” crime scenes were likely contaminated with DNA from a woman who worked at the product packaging company firm Greiner Bio-One in Frickenhausen.

They initially thought that the DNA was connected to someone the German media dubbed the “phantom killer” and the “woman without a face,” a dangerous and brutal suspect who has baffled law enforcement for some 15 years in connection with a string of six murders and robberies – including the murder of Kiesewetter.

According to the Heilbronn public prosecutor’s office, the state office of criminal investigation (LKA) had been working with several other state criminal authorities since April 2008 – when internal investigations began to suspect that the DNA evidence could be contaminated.

Greiner Bio-One nevertheless maintained that the swabs were free of DNA evidence from the start, citing certificates guaranteeing the quality of the swabs that had been delivered to police locales in the state of Baden-Württemberg.

In a press conference last week, the company’s medical supplies manager, Heinz Schmid, said the packaging description indicated the swabs were “not suitable for microbiological investigation.” Instead, they were meant for inspection of foodstuffs, hygienic tests and general medical testing.

But this brand of cotton swab was consistently sold to state criminal investigation offices in Germany and Austria.

“What the LKA did in detail with these swabs is something we don’t know,” Schmid said, adding that Greiner Bio-One delivered supplies mostly to police offices where no scientific investigations were ongoing.