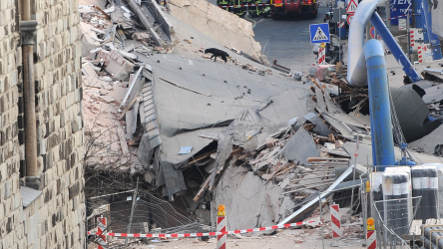 Who let a dog in there? Photo: DPA

According to the estimates of independent experts, continued building in the area will increase security at building sites, the city of Cologne said on Tuesday. Metro work will continue around the Bonner Wall, Chlodwigplatz and Rathaus stations.

Experts believe the collapse was caused by problems at the underground construction site near the archive. Recent media reports revealed that construction managers and city officials saw measurements that clearly showed the archive was sinking weeks before the building collapsed into a nearby underground metro construction site on March 3, killing two young men and destroying precious historical documents.

The city has since opened an investigation into what caused the accident. The state prosecutor on Tuesday ordered the raid of 40 local offices in the city’s investigation of the incident. Head prosecutor Günther Feld said the searches were meant to yield documents concerning metro construction in Cologne’s city centre.

Two engineering offices consulted by the city came to the conclusion that the building sites at Bonner Wall and Chlodwigplatz were geo-technically sound, as more than 90 percent of structural building there had been completed, according to a Wednesday report by German daily Frankfurter Allgemeine Zeitung. The most critical building phase at the Rathaus station is finished, and there was “no sign of a heightened risk.”

Construction there should, however, be further supervised, consultants said.