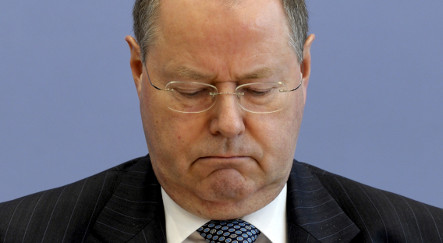 Speaking ahead of the G20 summit in London, Steinbrück, from the centre-left Social Democratic Party (SPD), said that the country had a long-term struggle ahead in the economic recovery after the financial crisis. He also criticised the greed of the banks’ executive boards.

“We’re experiencing a sharp decline now, and at some point it’s going to go upwards again very, very slowly. It’s going to take years. If we’re lucky, it will start in 2010,” Steinbrück said. “In May we will see a considerable drop in tax revenue – and that’s putting it mildly.”

The forecasts for economic growth, which the government presents in April, will also be “significantly worse” than the last ones, which forecast a 2.25 percent shrinkage in growth, he said.

Steinbrück also levelled sharp criticism at the heads of German banks. “These people have driven their institutions into the ground and now they’re going robbing as well,” he said, referring to the executive boards of Hypo Real Estate, Dresdner Bank and the Kfw banking group, who are all claiming pensions and financial settlements. He accused these people of tearing the social fabric.

“People lose their trust, see that justice has been breached and realise how greedy sections of the elite have become. This endangers social cohesion. It is immensely dangerous,” he said, adding that he could see “cars burning” in German suburbs as part of protests.

Despite the crisis, Steinbrück rejected the idea of a further economic rescue package, saying that if the state incurred more debt, it could trigger another crisis. “After overcoming the crisis we could be threatened by inflation, and massive inflation at that,” he said, adding that the state must be thrifty to prevent this. “For a long time there will be almost nothing extra to allocate,” he said.

The German finance minister told the magazine that he hoped the G20 countries would introduce regulations for the financial markets. “The time of excesses is over,” he said. “Capitalism must be able to cope with the fact that sometimes the traffic lights are red.”

He also distanced himself from SPD chairman Franz Müntefering’s criticism of Chancellor Angela Merkel. “To me that would be a stylistic error, and it doesn’t bring any political gain,” said Steinbrück. “In such a severe crisis, people don’t want to see a pub brawl. They want the government – in my son’s jargon – to do its job.”