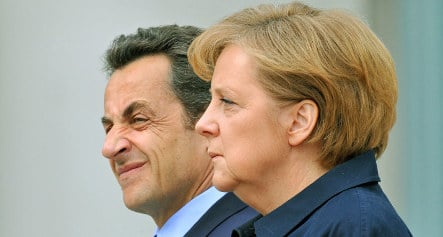 France has thrown down the gauntlet ahead of Thursday’s summit of leading world economies, threatening to walk out unless there is a deal on tough regulation of global finance and curbing offshore tax havens.

Sarkozy said he spoke with German Chancellor Angela Merkel late Tuesday and that they had agreed that, while “no firm agreement has been reached” between G20 negotiators, the latest draft deal “didn’t add up.”

“Neither France nor Germany are satisfied with the proposals as they currently stand,” Sarkozy told Europe 1 radio just hours before taking the presidential jet to London to meet fellow G20 leaders in Downing Street.

Sarkozy and Merkel are to hold a joint news conference in London at 15:30 GMT Wednesday to press their demands for new accounting norms, regulation of trader bonuses, a registry of hedge funds and a clampdown on tax havens.

“We are on exactly the same wavelength,” said the French leader, stressing that Paris and Berlin “will carry a European vision, based on European values” to the two-day summit. “I know from experience that we’re going to have to fight right up to the last minute,” he said of the talks ahead.

The French leader said some G20 powers had shown “less enthusiasm” for tough new rules, citing the “relative tolerance” shown in the past by so-called “Anglo-Saxon” countries towards tax havens, and also singling out China.

“We need to assess China’s exact position, because behind it there are the interests of Hong Kong, of Macao and perhaps even Singapore,” he said. Sarkozy said he was confident that Washington would take a tougher line under President Barack Obama’s leadership, saying he approved of the US leader’s recent statements on tax havens.

“But now is the time for action,” he said, warning “it would be perfectly unacceptable for there to be no concrete action within days” of the summit. “We have said very clearly that we want a clear definition of a tax haven, lists of financial centres that do not cooperate with OECD criteria, and to draw the consequences of that.”

The French leader repeated his threat to walk away if the summit refuses to address calls for stronger regulation. “I will not associate myself with a false summit, that concludes with a statement of hollow compromises, that does not address the problems that we face,” he warned.

But he appeared to temper his earlier remarks, saying “an empty chair would signal a failure for the summit, and I can’t believe it would come to that.” The Group of 20 meeting has exposed painful divisions over how best to tackle the crisis, which the World Bank forecast would see the global economy contract by 1.7 percent this year.

While the United States and others put the emphasis on massive stimulus spending, European countries led by France and Germany insist tighter global financial regulation is the priority to preventing new crises.

But the White House has played down suggestions of a rift, and Obama, who arrived in London on Tuesday on his first trans-Atlantic trip as president, has said any talk of regulation versus stimulus was a “phony debate.”