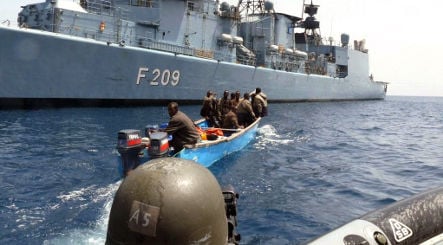 German military forces detained seven Somali pirates who attacked the naval fuel carrier “Spessart” on Sunday afternoon in the notoriously dangerous waters near the Horn of Africa, a spokesperson for the German Bundeswehr said. The ship sustained light damage, and seven pirates were taken into custody.

The state prosecutor’s office in Kiel will receive support in the latest legal process, according to the Defence Ministry. The Foreign, Interior, Justice and Defence ministries addressed the potential for the pirates to stand trial in Kenya on Monday.

In early March, nine Somali men captured by a German frigate as they attacked a cargo ship were sent to Kenya – not Germany – for trial, the Defence Ministry confirmed at the time. A legal possibility exists to bring defendants before a German court for piracy when German interests are “significantly” concerned. In this case, the pirates would be brought from Djibouti to the Hamburg prosecutor’s office.

Parliamentary defence expert for the conservative Bavarian Christian Social Union (CSU) party, Christian Schmidt, had voiced his support for the pirates’ prosecution in Germany, since the case concerns German interests.

“Without wanting to anticipate how this will be decided, I am of the opinion that the pirates should stand trial in Germany,” Schmidt said on Monday.