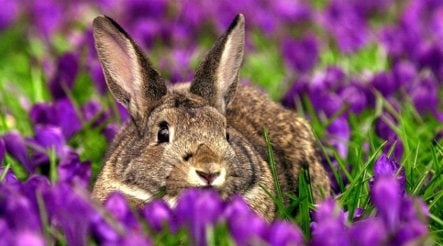 In her new Arte network series Sarah Wiener und die Küchenkinder, or “Sarah Wiener and the kitchen children,” a rabbit is stunned with an electric shock before the 46-year-old star chef kills, skins and butchers it – in front of her teenage charges.

Not surprisingly, the kids found this disturbing, the paper reported.

One witness, 14-year-old Simon said: “It was quite disgusting – the rabbit’s belly was still warm, not to mention seeing its beautiful, cuddly fur pulled off. Guts out, and everything in the trash. But the worst part was how it was hung up like socks.”

Sydney, 15, told the paper: “What affected me the most, I think, was when its throat was cut and quite a lot of blood came out.”

Wiener made no apologies for confronting the children with the realities of butchering livestock for dinner, despite the fact that several of the children cried during the filming.

“I believe that people should know what they eat,” she said. “It’s exactly from not seeing what goes on in our slaughterhouses that a transfiguration, an aestheticization and an underestimation of food products occurs.”

She also added that the youngsters had not been forced to observe the slaughter.

“If one or other of them are so shocked by this that they become vegetarians, I can only say that it wouldn’t do the climate any harm,” she said, referring to the sizeable amount of energy it takes to raise livestock.

It seems no lasting harm was done, at least for the children: the next day they ate delicious roast rabbit prepared from the butchered bunny.

The ten-part Arte series begins on April 6. The episode involving the rabbit slaughter airs on April 14.