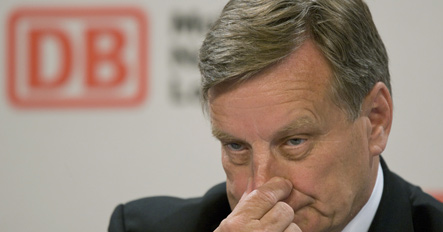 In Sunday’s Bild am Sonntag newspaper Mehdorn dismisses his opponents as “politically motivated,” even as his support from the federal government appears to be diminishing. This support was conspicuously lacking on Friday, when media reports alleged that the Deutsche Bahn had not only monitored the emails of its employees, but had spied on journalists and scientists critical of the company.

The company acknowledged last week that some investigative operations had taken place in 2002-2003. Mehdorn told workers in a letter he had made “mistakes,” but insisted his actions were meant to root out corruption and were irreproachable from a legal point of view.

He told Bild am Sonntag defiantly that there were two good reasons why he shouldn’t resign over the issue: there was absolutely no evidence of criminal activity of any Deutsche Bahn employees in the data protection affair, and the rail service had become “more punctual, cleaner and friendlier” under his decade-long tenure.

“Apparently some people want to torpedo the progress that Deutsche Bahn is making in order to push through a left-wing agenda,” he said.

Mehdorn continues to claim that the company did not spy on anyone, nor did they illegally obstruct last year’s train-driver strikes. He accuses those making such claims of creating an atmosphere of corruption out of “suspicion, accusation, and prejudice.”

But there is increasing scepticism in government circles that Chancellor Angela Merkel will maintain her habitual support of Mehdorn indefinitely. According to several press reports, Merkel’s patience is running out, and she intends to inform herself of the latest details of the scandal and make a decision on Mehdorn’s future in the next few days.

On the left, the jury has long returned. “Mehdorn is not the Pope,” spokesman for the centre-left Social Democrats Björn Böhning is quoted as saying. Meanwhile Berlin’s SPD mayor Klaus Wowereit offered his own uncompromising twopence worth recently. “That man has to go,” he said.