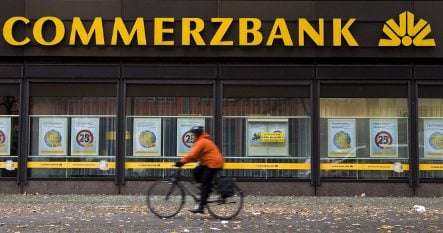 Commerzbank had reported a 2008 net profit of €3 million in February but that figure did not include results from Dresdner Bank, bought from the insurance group Allianz for €4.7 billion.

Commerzbank waited until publishing its annual report to present pro forma results that included Dresdner, which has suffered steep losses owing to the international financial crisis.

“The overriding theme of 2009 will be the integration of Dresdner Bank,” Commerzbank said, without providing a detailed earnings forecast.

Commerzbank shares soared 11.06 percent to €4.52 in midday trades on Friday, the biggest gainer by far, while the DAX index of leading German stocks was 1.27 percent lower overall.

Since Friday, stock in the bank has gained more than 50 percent.

Chairman Martin Blessing had said in February that the bank did not expect to see a profit this year but that it should do so in 2010.

“If the effects of the global interest rate cuts leads to a recovery from 2010 onwards, Germany is expected to grow faster than the rest of the eurozone,” a statement said. “This will benefit the new Commerzbank.”

Investors welcomed the guidance and news the bank had covered much of its 2009 refinancing needs, pushing the shares sharply higher in midday trade on the Frankfurt stock exchange.

Because Commerzbank has received support from the German banking sector stabilisation fund SoFFin, the salaries of senior executives will be capped and the bank will not pay a dividend this year or next, the statement said.

The government now owns a stake of 25 percent plus one share in Commerzbank following a second capital injection of €10 billion that brought the total to €18.2 billion.

On Friday, the bank said that “2008 was dominated by the effects of the financial market crisis. Nevertheless, we took important steps to further strengthen Commerzbank’s position.”

The bank forecast higher operating expenses and around €2 billion in restructuring charges this year but added that it also expected to earn higher net interest income.

The statement said Commerzbank had already secured more than half of the year’s total refinancing requirements and expected to raise a total of around €20 billion in the capital markets in 2009.

It forecast growth in the bank’s private and corporate clients segment this year as well.

Even without the state aid and a break in the price it paid for Dresdner, Commerzbank “demonstrates reassuring financial stability, it has no problem with refinancing,” Baader Bank trader Robert Halver told AFP.

The new Commerzbank holds accumulated toxic assets with a market value of more than €55 billion, the annual report said.

But they have been isolated since January in an internal division following a restructuring of the bank, because “they are complex financial products that must be managed separately,” a bank spokesman told AFP.