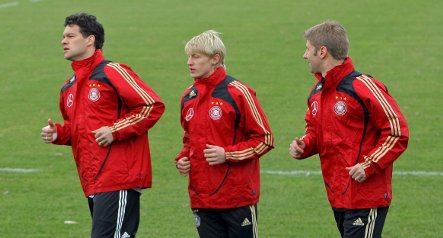 Germany faces minnows Liechtenstein in a World Cup qualifier on Saturday in Leipzig, but after home defeats by Norway and England in their last two games, Chelsea star Ballack must lead his team to a comfortable victory, insisted Zwanziger.

Ballack landed himself in hot water with the DFB last October for accusing Germany coach Joachim Löw of not showing his senior players enough respect and loyalty.

The Germany captain apologised two weeks later, but neither Ballack nor Löw came out of the episode with any credit.

With Germany at the top of their qualifying group and unbeaten four games straight, they need two big wins in their qualifiers in Leipzig this Saturday and in Cardiff on April 1 against Wales to boost flagging confidence.

“If the team play well against Liechtenstein and Wales and deliver the six points, I expect issues which have been discussed in the past will quickly fade as a topic,” said Zwanziger, referring to last year’s public spat between Ballack and Löw.

And it seems Ballack has been working hard behind the scenes to build bridges within the Germany squad.

“We notice in discussions and conversations Michael has changed and we see a completely positive attitude from him in the team environment,” said Germany team manager Oliver Bierhoff.

Bierhoff and Ballack had an on field spat immediately after the Euro 2008 final 1-0 defeat to Spain in Vienna last June, but Bierhoff has defended Ballack from recent criticism within the Germany squad.

Injured Bayern Munich striker Miroslav Klose, who has captained Germany on several occasions, said Ballack must work hard to lead both on and off the field, and Bierhoff took exception to Klose’s comments.

“These comments were senseless, because they do nothing to help the team, and the timing was unfortunate so close to the game,” said Bierhoff.

With ten years experience of international football behind him, Ballack has said he will work with new members of the squad, but Germany need a big win over Liechtenstein – ranked 151 in the world – to boost confidence.

“It doesn’t matter if we are playing Liechtenstein or Wales, the opposition is not important, we just have to win both games and get the points,” said striker Lukas Podolski defiantly.