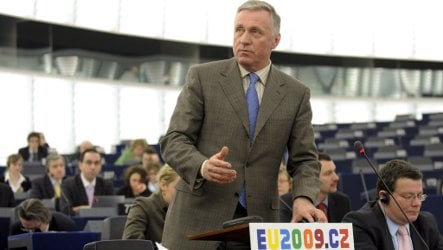 Czech Prime Minister Mirek Topolanek on Tuesday lost a vote of confidence, roiling capitals across Europe. The toppled leader had been the driving force in Prague pushing for ratification of the treaty, which is meant to streamline the EU’s institutions to make the bloc of 27 nations more managable.

German government spokesman Thomas Steg on Wednesday said Berlin still hoped “that the Czech presidency will continue to be seen as effective within the EU.”

Chancellor Angela Merkel also called Topolanek to assure him Prague had Berlin’s full support. But it is unlikely that Czech President Vaclav Klaus, known as a virulent opponent of the so-called Lisbon Treaty, will now suddenly decide to champion European issues during the final three months of his country’s EU presidency.

Elmar Brok, a leading German Christian Democratic member of the European Parliament, told the Financial Times Deutschland on Wednesday that he feared Klaus would now try to bury the reform treaty.

“I’m extremely worried,” Brok said, explaining that Topolanek had lost any leverage he might have had with the country’s parliamentarians.

But the outgoing prime minister hasn’t only created a headache for his European colleagues on the troubled treaty. Topolanek also created a stir on Wednesday in an address to the European Parliament in Strasbourg, when he called the US policy response to the global economic crisis the “road to Hell” and said that Washington clearly hadn’t learned anything from the Great Depression in the 1930s.

He also claimed the United States would have to “sell weapons” in order to finance its heavy stimulus spending.

Martin Schulz, the head of Germany’s Social Democrats in the European Parliament, immediately tried to limit the diplomatic damage only weeks before US President Barack Obama makes his first official trip to Europe.

“You don’t speak in the name of the EU, you speak only in your own name,” Schulz told Topolanek. “You haven’t understood what the responsibilities of the EU presidency entail.”