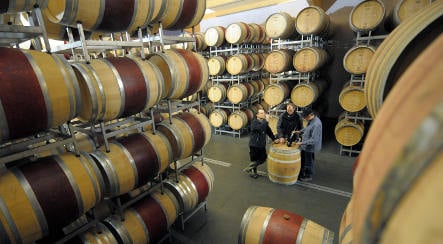 A ruling from the Constitutional Court in early February prompted the unrest, when it said the monopolistic marketing association CMA could not continue to insist that wine makers pay a fee.

Now demand for choice in marketing and representation is spreading through Teutonic vineyards.

Monika Reule, manager of the wine institute DWI, said she was concerned after the first official objection to the compulsory membership had arrived in her office.

“I am realistically assuming that a legal complaint will be submitted,” she said.

“And for this amount, I am not getting enough,” said manager Michael Willkomm, adding that given the choice, he would spend the money on specific promotion of his company rather than the promotion for German wines in general, as conducted by the CMA.

He and others complain of a lack of opportunity to have a say in the association despite having to pay for it.

Head of the cellar association in German state of Rhineland-Palatinate, Albrecht Ehses, confirmed some wine makers were likely to work together to reform the association. “We are not looking to destroy the DWI, but we want legal clarity,” he said.

Others are supportive of the association, praising its role as voice for the German wine industry and pointing out that the constitutional court said that compulsory payments could continue to be levied if a communal use was proven.

“We need the institutions, in particular internationally,” said Bernd Kern, manager of the marketing sector for Rhine-Hesse.

And Reule said she could not understand why others were so dissatisfied. “All associations and interest groups are represented in our committee,” she said.

“Of course it is part of the wine business to carefully consider marketing. But I am convinced that this form of special tariffs is the most fair method.”