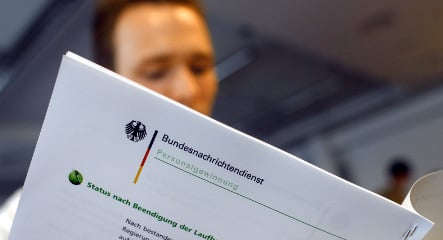 It says in the rules, no affairs with translators Photo: DPA

The 42-year-old man, named only as Anton Robert K., was working in the Balkans when he developed an ‘intimate’ relationship with translator Murat A., 28, according to a report in Der Spiegel magazine.

He was arrested last Tuesday near Stuttgart, the magazine said, after returning from Pristina, where until 2008 he had been working undercover in a German government office.

Anton K., who the magazine reported is married, is alleged to have known that Murat A. had links to organised crime in the region, as well as possibly to foreign intelligence agencies.

The magazine said a memory stick containing sensitive information was found in his possession when he was arrested.